Based in Kingston, Tasmania, Channel Earthmoving is a wet hire business with over 50 staff and well over that amount of hire equipment. Malcolm started the business with himself and one excavator back in 2009. Twelve years of "long hours and hard work," and the company has grown substantially, allowing them to cater to the likes of the top 3 Civil engineering companies in Tasmania.

This area of Australia hosts a highly competitive market that requires companies to be on their A-game 24/7 to win contracts and keep business booming. This is why Malcolm does his due diligence in selecting the right team with the best gear.

"Competition is pretty hot here; if you haven't got the gear or the boys, you are not gonna get the job..."

Malcolm's primary goal is to supply "the best operators, with the best gear, that do the best work…" and he does just that. With well over 50 machines and staff, he is more than well equipped to take on a whole host of jobs all over the state. Malcolm keeps his business running like a well-oiled machine to efficiently move operators and equipment around Tasmania at a moment's notice.

Existing in this highly competitive market brings its challenges, however. A few essential practices have to be upheld to deliver what is required to function well in this industry. Reputation, reliability, immediacy, and customer service; Malcolm takes these head-on and believes that the best way to tackle the challenge is simply to be all of those things and hold true to his reputation by consistently delivering the best gear, workers, and service.

The Values of Good Business

Existing in this highly competitive market brings its challenges, however. A few essential practices have to be upheld to deliver what is required to function well in this industry. Reputation, reliability, immediacy, and customer service; Malcolm takes these head-on and believes that the best way to tackle the challenge is simply to be all of those things and hold true to his reputation by consistently delivering the best gear, workers, and service.

Because these values are so important to the success of Malcolm’s team, it implies that employing the right team and purchasing reliable, high-quality equipment is paramount. With an industry like earthmoving, everything is fast-paced; if you supply something that cannot complete the job it was supposed to, it won't be good when attempting to win future contracts. "Downtime is costly, but more so it makes us look like tools… if we send out a machine to a big job and it breaks down, it just looks bad… It's a reputational thing." Malcolm bases his decisions on equipment with a similar mindset to most of his customers.

Reputation, quality, reliability, and customer service in that order. To him, if a supplier lacks any of those things, then the supplier isn't good enough. Channel Earthmoving differs from other businesses in this space because "good enough, isn't good enough, we buy the best tools and nothing less." Developing a reputation is easy; however, developing and sustaining an excellent reputation like Channel Earthmoving requires a lot of hard work in terms of being reliable. Malcolm and his team all have to be on the same page when it comes to showing up, being on time, and putting in the effort to ensure all their equipment is serviced correctly to keep it in perfect working condition.

By keeping in touch with every part of his business, Malcolm can keep a finger on the pulse and make sure that his well-oiled machine keeps turning, his employees are happy, his equipment is kept in suitable working condition, and the calls keep coming in.

Owning a business like Channel Earthmoving means that he has to wear many hats. "I'm an estimator, I'm an operator, truck driver, I'm a mechanic, whatever is needed, I do a bit of everything… but predominantly, I make sure everything is ready to roll." In his opinion, this flexibility is evident across his whole team and is another value that contributes to Channel Earthmoving being the best infield. As confirmed by Jason, Channel Earthmoving general manager, this behaviour of staying flexible equips Channel Earthmoving with the ability to immediately respond and distribute gear in a punctual manner.

"We cater to a lot of smaller businesses as well, they usually operate smaller machines like three tonners, but sometimes need something a bit bigger like a 30 tonner, that's when they can ring me up, and we'll have a machine and operator there the next morning."

Channel Earthmoving's customers know that if they make the call, customer support will be there. This trust in his brand is similar to Malcolm's purchasing process. Having used a vast range of equipment and attachments over the last 20 years, we believe he is a knowledgeable person to ask what attachments are best in his professional opinion. Spoiler, he uses Attach2 for most of his excavator setups.

"Every machine gets a tilt hitch… we decided this on about machine number 4… It just makes the job so much easier… and you just really can't do the job without it… we're planning on attaching them to almost all of our machines…."

Malcolm trusts in the brand due to its similar approach to values in business; he knows that if anything goes wrong, he will receive immediate help when needed; not that he does have issues due to his strict servicing plan company-wide.

Outside of customer support, Malcolm has tried and tested the A2 equipment, and he sees it as highly reliable. Extravagantly put, "we haven't had any dramas, so we just kept using them." Having used a range of competitors' hitches, Malcolm described a few where he had too many issues and wanted to avoid poor support in the future. Now receiving the service and reliability the company needed, Malcolm is more than happy with his decision to go with Attach2.

Channel Earthmoving decided on using tilt hitches almost from the get-go due to how much easier work becomes with them. From fitting up his excavators with GPS systems to operating the machinery, Malcolm has found that using Attach2 is just easy.

"The beauty of Attach2 13 tonne hitches is that it has the neat space for the Topcon GPS."

GPS is becoming more and more common for excavator operators industry-wide, which traditionally required a complex setup, where the GPS had to be placed in different spots to find where it sits the best and safest. With the likes of the Heli-Tilt, the hitch has a place that is protected and centred, which allows for a much easier setup. Or, as Malcolm said it, "It's tucked up out of the way and safe.”

Making it easy doesn't stop at setting things up. For the type of work Malcolm and his team do, the job almost isn't doable without a tilting hitch. Often excavator operators find themselves in tight spots when working on things like roading or general civil projects.

"If you've got a 20 tonner sitting on one lane of a busy road, you can't really move around. You have to be able to sit in one spot and do everything." 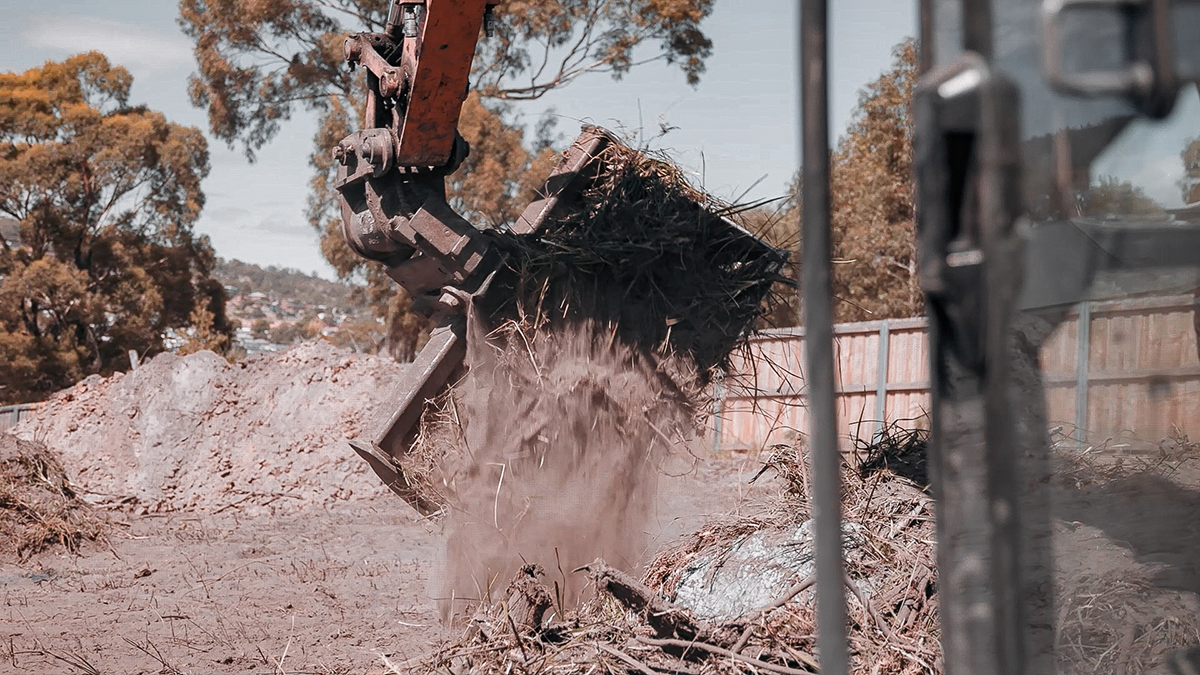 Tilting hitches like the Heli-Tilt allow operators to do just that and stay in one spot while working rather than moving the whole excavator to achieve the angles desired.

Examples like this illustrate business decisions that prove ROI for Malcolm. Make it easier for a team to finish more work more efficiently while delivering quality service, and customers will keep coming back for more.