What's the difference between a good drainlayer and a bad one? According to Mark Currie, MD of Drainways in the Hawkes Bay, it comes down to processes and rework, and sound processes and less rework come down to a standardised structure and skilled staff.

In recent years Drainways has been aiming to grow their enterprise in the Hawkes Bay region, but not sacrifice their distinct focus on drainage works and a tight-knit team culture.

Initially performing drainage services as a subcontractor for primary contractors on projects, Mark says that their services in project management have been increasingly demanded and have thus become the lead earthworks contractor on notable projects throughout the Hawkes Bay.
Mark mentions why this is, "If you can do drainage well, you can do the rest well, as civil works like subdivisions rely on the drainage to be completed on time and perfectly meet spec. If they're not, things like roading crews, footpaths etc. are held up, which are often only available on a tight schedule."

But it's not just subdivisions that Drainways do, although it's something they've done more of recently. Key drainage and water infrastructure jobs for the regional councils is what Drainways consider their foremost ambition and their key driver in striving for excellence.
Like most of us in modern society take for granted; Freshwater systems, stormwater and sewage systems aren't just for our day to day lives but critical to coping with weather or system failure events.
Priding themselves on a 'right the first time' approach, Mark tells us that Drainways make great efforts to have the best staff for the job, but also equip them with clarity, knowledge and tools to get it done.
"We train our staff from the bottom up, rather than just poach people from other contractors, we focus on upskilling all our staff, and our more experienced staff teaches newer ones real skills in drainlaying." 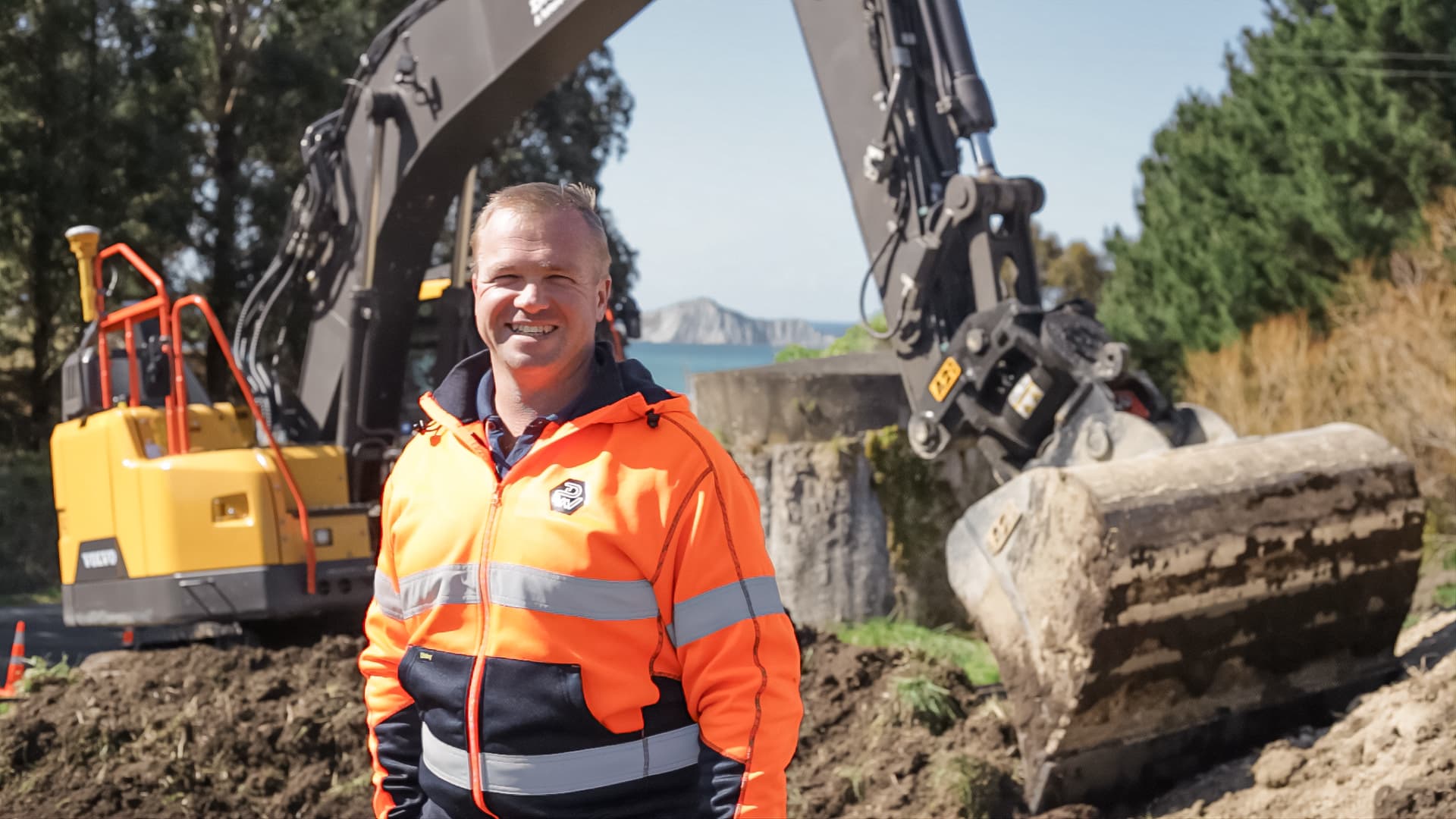 A visit to Waimarama

Waimarama beach a small beachside village 30 minutes from Havelock North is the location of Drainways smaller projects, but no less important. Situated on a gently rising hill, Jaydon Currie (Mark's brother and one of Drainways on-site project managers), is preparing the hillside for a new expanded water treatment plant for the local community.
With a new ECR235 equipped with 3D GPS and Heli-Tilt hitch, Jaydon has everything at hand to shape, batter and bulk out the first stage of the project, preparing it for future concrete and pipework.
Of the new digger with hitch and bucket combo, Jaydon says "The Attach2 Hitch and Bucket combination I find very, very good. The bucket especially is a good shape, and the hitch is beautifully smooth. It does what it needs to do, and I like the attachment detach and attach side of it, it's nice and easy." 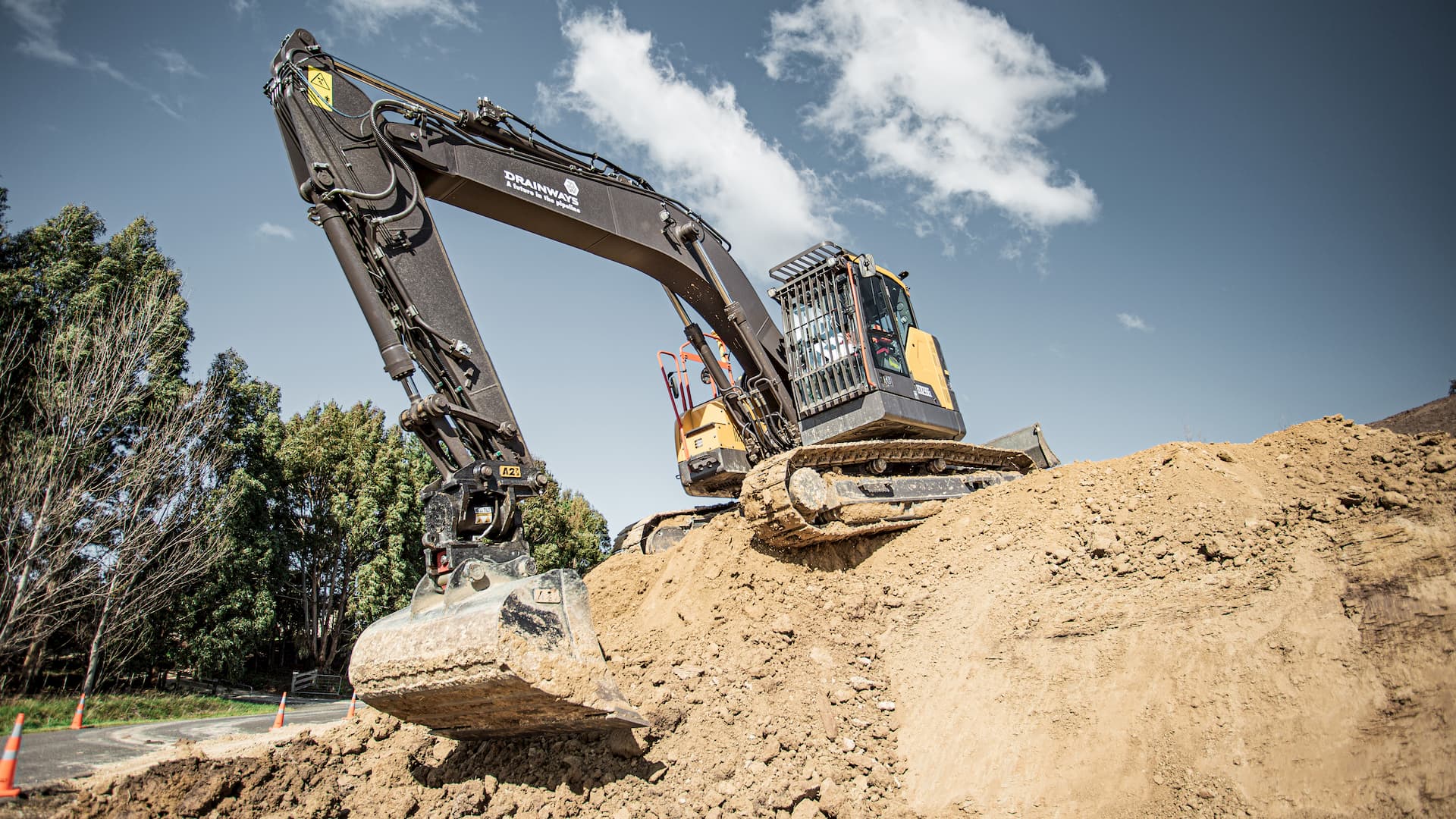 Like most earthworks contractors, Drainways needs equipment that matches what they do, with particular attention to breakout performance, uptime and job efficiency.

As the Managing Director of Drainways, Mark doesn't get much time if any to get in the cab, but he certainly feels the pain that comes with equipment and process problems. Since adding GPS and Tilting Hitches to their equipment spec, they've noticed a tremendous increase in productivity and efficiency. "GPS means the operator has all the information for the job in the digger; there's also a massive surveying cost saving, no skewed trenches when it's windy, bumped pegs or lasers to setup."

"I was told when we got our first tilt hitch that we wouldn't go back and we haven't. It makes a difference being able to tilt any of the attachments and change them from the cab."

Speaking of tilt hitches, Mark says that their primary driver in choosing Attach2 as their hitch supplier has been around service. "Like any piece of equipment we've had a problem at some point, and when we have, Attach2 has been there the next morning."
Like most company executives, Mark sees that downtime is the biggest cost to the business and choosing companies that deliver good service is what matters to them the most.