Mills Albert began at the turn of the century in 2000 with a small core team. Dave Mills, Lisa Mills Albert, and a brother Phillip Albert have now been operating their business for over 20 years. They service the wider Wellington, Wairarapa, Kapiti, and Manawatu regions offering a high standard of work with the aim of completing it both efficiently and safely.

Paul Albert is the current General Manager for Mills Albert and has along with the directors helped build the company up into what it is today. Starting with just the family members, the company has over the course of 20 years acquired 80-100 staff, and all the equipment needed to cover two industries, Mills Albert Ltd which is the civil side and Mills Albert Forestry Limited which is their tree logging and harvesting company. It wasn’t always like that however, at the company’s birth the founders started out with a single 4x4 ute, and relied on hiring equipment to save on costs. Hiring equipment for many contractors is the logical thing to do as the capital required to purchase machinery off the bat is often quite large; by hiring what they needed, Mills Albert avoided creating debt for themselves while starting off which allowed them to become cashflow positive and start hiring more people.

“As the company grew there was a lot of expenditure on hire equipment, so it didn’t make much sense to continue doing that, so the company put an equipment buying and hiring strategy in place where they started buying new or second hand equipment, and hiring to fill the gaps.” After a short time, the company had grown to the point where hiring machinery costs more than it would to buy equipment outright. This strategy allowed Mills Albert to purchase the equipment they knew they needed while still hiring other equipment to fill in the gaps.

Saving capital and avoiding debt by hiring equipment allowed the company to diversify, taking on a range of different jobs, all requiring different equipment. This diversification in conjunction with hiring meant that Mills Albert could sample different types of jobs and industries without having to fully commit to purchasing equipment before deciding if they wanted to take on those different types of jobs. The result? “Over the last 20-21 years they have built up a fleet of over 30 excavators, as well as dump trucks, bulldozers, specialized forestry machines such as self-levelling tree falling machines, skidders and grapple shovel machines which all play a part in the company’s ability to take on diverse jobs.” Mills Albert now offers contracting for “almost anything in the civil construction and forestry space including drainage, retaining walls, earthworks, and entire subdivisions.” 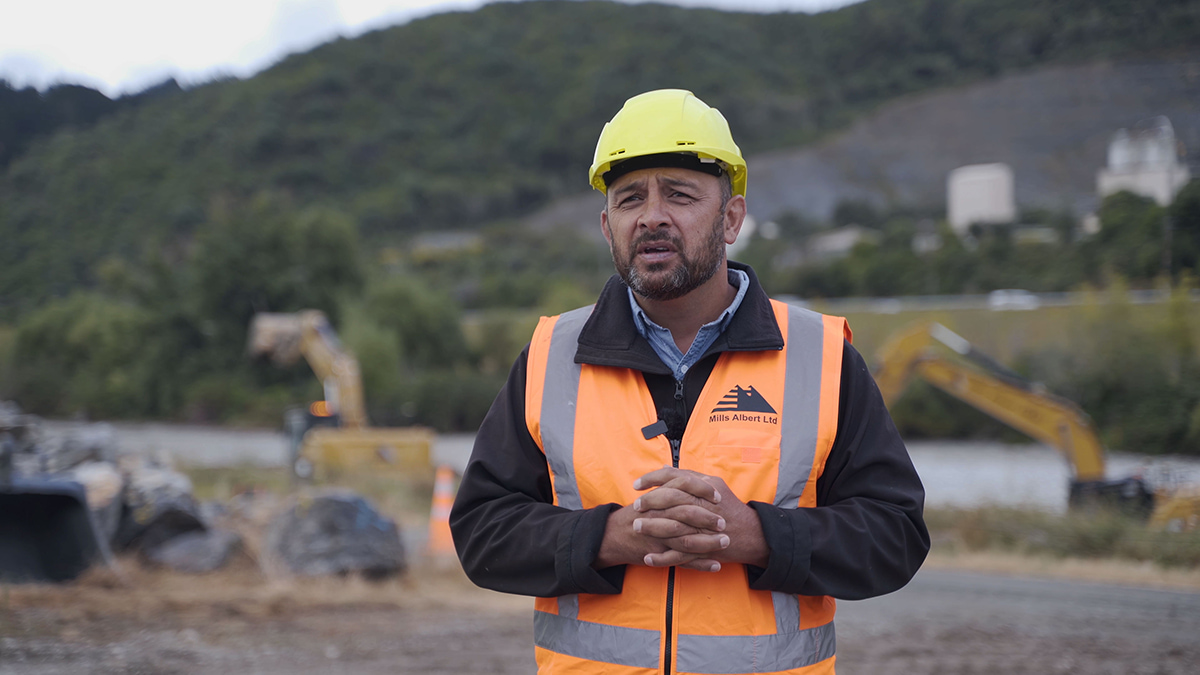 The diversification of their services also allowed them to expand geographically. The company was born on the Kapiti Coast, but has now expanded to cover three regions, Manawatu, Greater Wellington, and the Wairarapa. Paul has attributed the ability to grow to Mills Albert’s methodology and core values which contribute to their delivery of quality work that “gets noticed” by councils and people who need contracting services.

Beginning with the management staff, the company’s core values stem from how the company was started. “As a company, it was founded through family. We pride ourselves on it being a family-owned business and you don't have to be blood to be family within Mills Albert limited. We understand that people have lives, and they have their own families. We welcome that. We're still at a size where the owners directors still know everybody's names and still understand what people's families are doing. And I think that has a huge benefit with staff, we have a genuine interest in what our staff and their families are doing, and in turn our staff have a strong interest in being a part of our family.” With a value like this, Mills Albert encourages its staff to be engaged and invested in the business which results in a higher standard of work and happier staff that are willing to help out when needed which is something else Mills Albert has become known for. 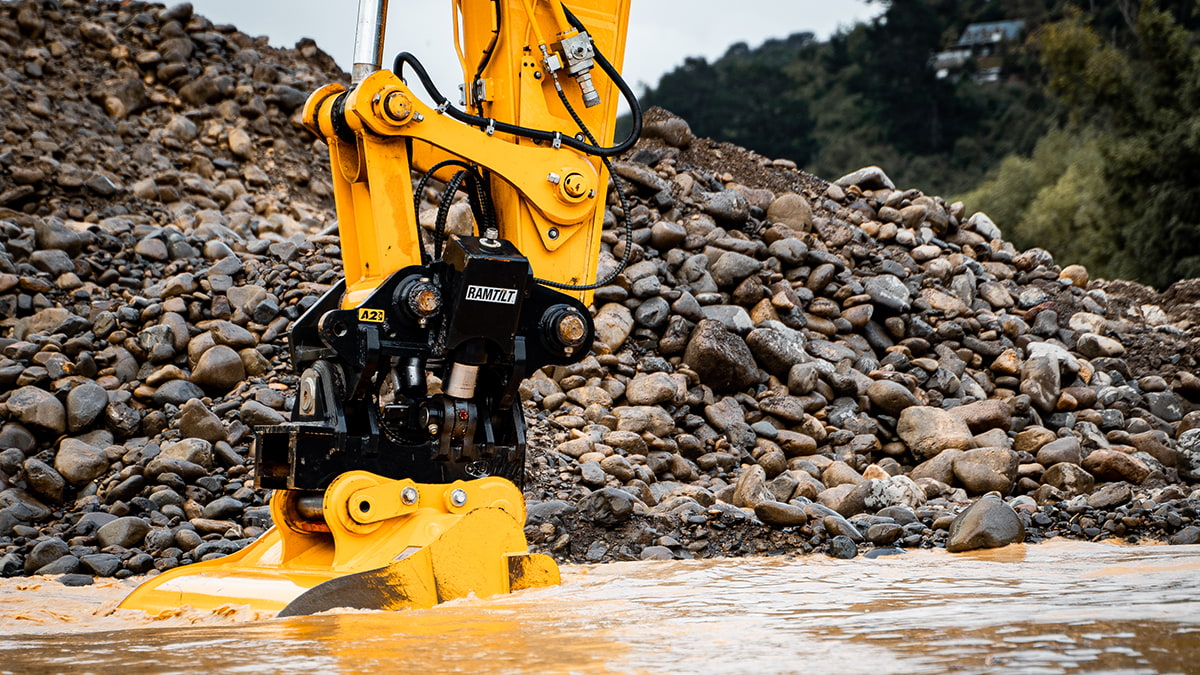 Mills Albert as a company aims to “help out” wherever needed. Currently, in New Zealand, there is a housing crisis, and Mills Albert is at the forefront of developments which seek to help solve this problem through the construction of entire new subdivisions. This is just one example of the ways that they have been getting involved however, they were also involved early on in the Transmission Gully project SH58 Safety Improvements, and currently in Wellington Te Awa Kairangi  Climate Resilience Project. Mills Albert Ltd is also working on major infrastructure projects in the Wanganui Region. Alongside this Mills Albert Ltd also gets involved in the emergency space. “We also pride ourselves on being able to help in emergency works, so we will always have someone on call they can be deployed to emergency situations where required.”

The final and strongest values that Paul puts weight on at Mills Albert is their values for good communication. Whether it be with customers or staff, communication and inclusivity are some major contributing factors to getting things right. ”The biggest thing we have is inclusiveness. That is a big thing for us, ensuring that everybody has a say. If anybody has any issues, they can tell us, we run an open-door policy throughout the business.” This inclusivity directly encourages communication between staff and the management team, but it doesn’t stop there. The directors and management staff are also heavily involved in communication with their customers. “I think one of the keys is just having that touch with the client. You'll find that the directors are always involved. We may sign a contract, but you'll find that right from the top there is going to be almost day-to-day involvement within all our projects, and I think that's a key thing. We're not leaving it to other people to manage which gives us direct oversight of all of our projects which means we get it done the right way the first time.” 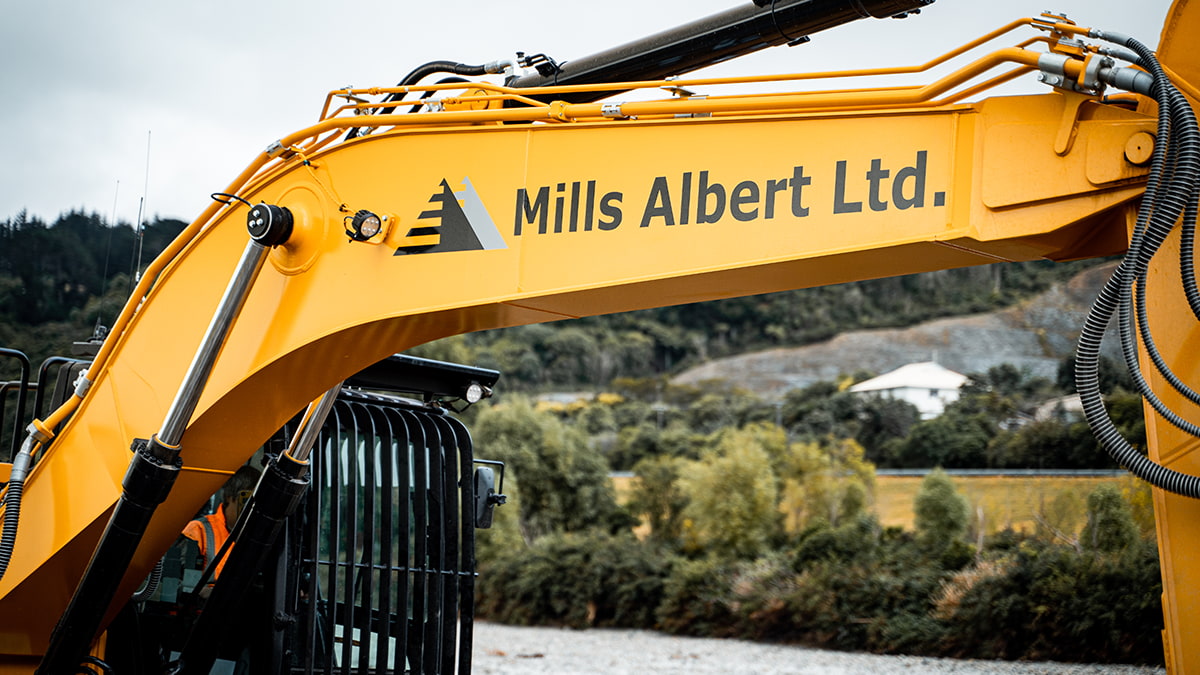 With a solid team and strong values, the only things that Mills Albert needed to become the dominating force that they now are, was the industry experience and the gear to go with it. After twenty plus years in the industry, they have both now. When purchasing equipment, Paul relies on the knowledge of his team to make sure they are getting the right equipment for the job; however, there are three main factors that stand out when dealing with suppliers of equipment. “When it comes to machinery and equipment that we use, look, there's these multiple criteria. It comes down to pricing, reputation and the machine being fit for purpose.”

Those criteria are met by a range of suppliers in the industry, which is why Mills Albert now uses a range of different brands to get the best results. “We run a variety of machines or brands including Caterpillar, Sumitomo, John Deere and Kobelco equipment The key thing for us is that whatever we choose, it's going to be the right equipment or plant for the operation we're undertaking.” Going back to the beginning, that’s where hiring equipment played a major role. It gave Mills Albert the ability to test out machinery to see if it would work for them before buying. This led to trying out not just the machines but the attachments and tools that can make a machine perform much more efficiently, which is how Mills Albert came to use Attach2 for its hitches and attachments. “We got more accustomed to those using Attach2 equipment with hire equipment initially, and then we started putting them onto our own machines. In our latest round of procurement, we have purchased several Attach2 Ram-Tilts, Heli-Tilts and attachments. We felt that was the best tool that we wanted on the machines for what we need at this current time.” 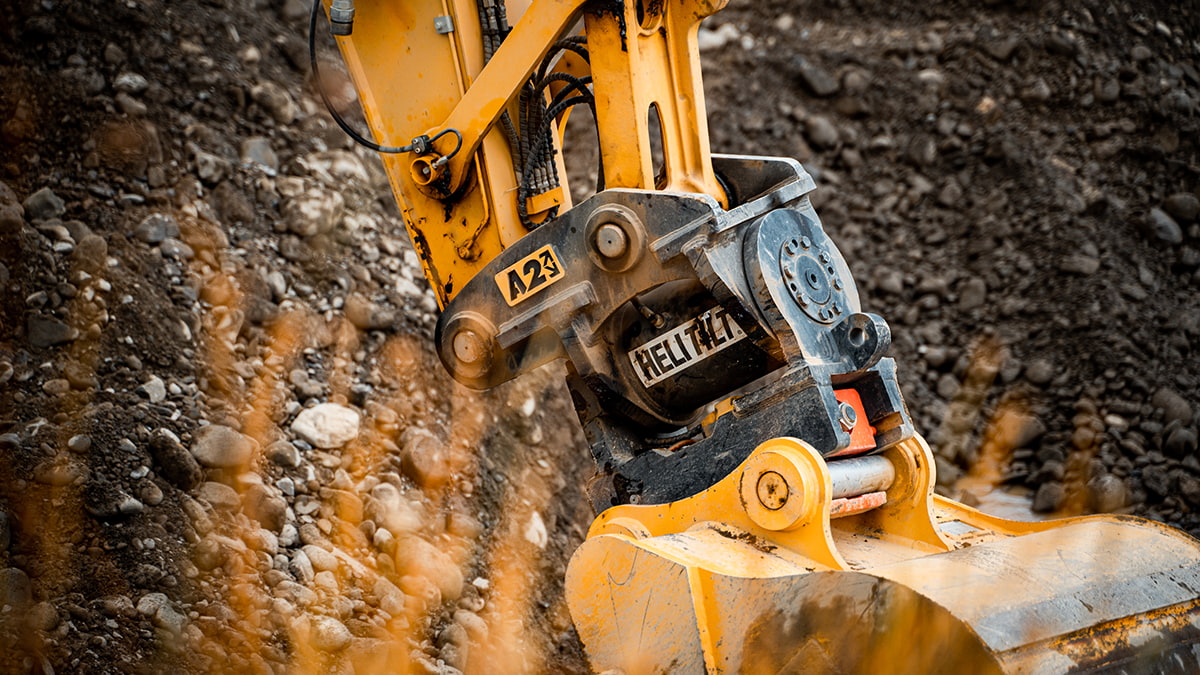 What Mills Albert needs is equipment that makes the job easier and faster without putting extra strain on their operators, which is why they chose to continue using Attach2 after they reduced the amount of equipment they hired. In reference to the Heli-Tilt and Ram-Tilt Paul said, “with the fact that you are not running tilt hoses on your buckets, any contractor would tell you you're immediately going to save money on any hose repairs. That's massive. And it's also more time-efficient because the operators aren't getting out of the cab to unclip and refit hoses. That's huge for us when it comes to things like forestry, roading or any jobs. It also does make it easier for the operator to change buckets so they're not using the cleanup bucket when they should be using a digging bucket and vice versa.”

Paul regards features like these as quite important because at the end of the day they are a contracting business where time is of the essence. “There's always time pressure on any of the jobs that we undertake. You can't let that be an excuse for quality, if you complete a job quickly but the quality isn’t there, you're going to exceed your time anyway or put more pressure on yourself because you're going to have to redo work. So having the right pieces of equipment and the right attachments to make the job easy is vital to us here at Mills Albert.”

Mills Albert is a prime example of smart business. They started out with a strong core team and proceeded to build a business based on acquiring what they needed to deliver quality service rather than just jumping into buying equipment because they could. By taking their time and hiring gear they developed a strong understanding of the equipment they were using before they bought their own, which has significantly contributed to their ability to deliver a quality result on time. “We pride ourselves on delivering on time and with quality, and that's the key thing, we're willing to give anything a go. It's about extending ourselves and furthering our capability within Mills Albert. It's a proud company and and in something that's been built up over a long period of time, when things are built up over a long period of time, you find that you get all your processes and everything required within the company right, and that's what we've got going with Mills Albert at the moment.” 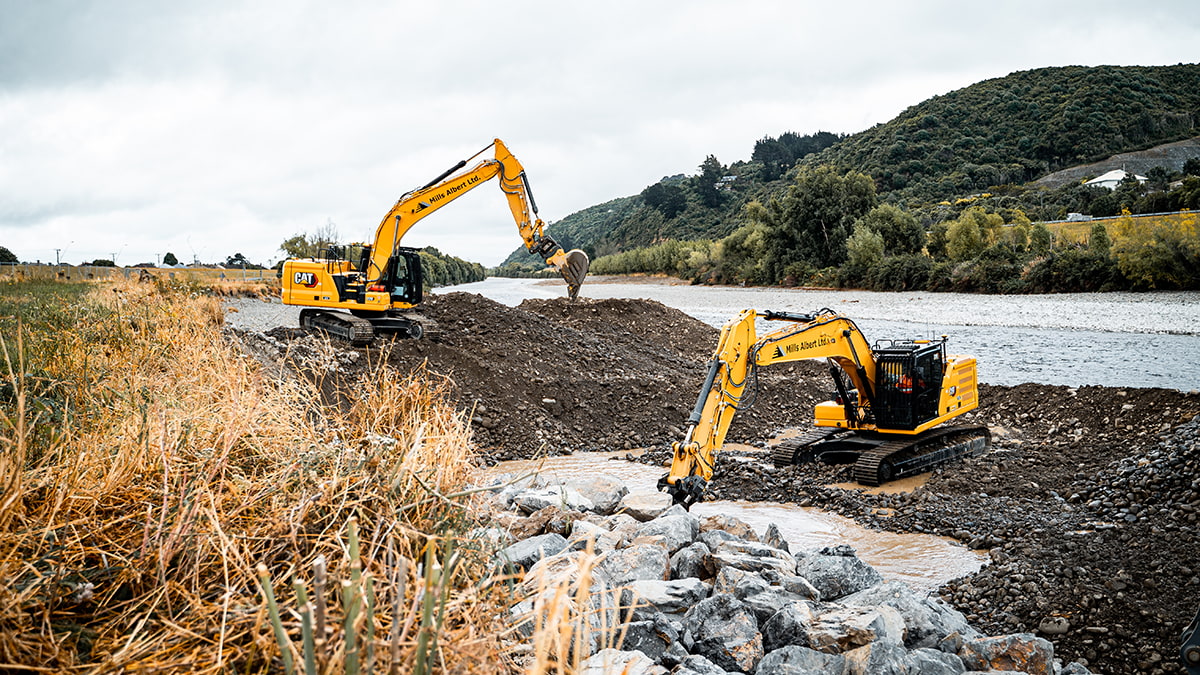 You're in Remarkable Hands

If you’re an Attach2 customer, we’ve got some lovely news for you. As well as supplying you with precision-engineered attachments..