Can I Run a Breaker On My Coupler?

Well, that's the short answer. However, many attachment companies won't recommend you do. Why is this?

Historically speaking, hydraulic breakers or hammers were tough on gear; the rapid movement coupled with the weight of the attachment usually resulted in a decreased lifespan for the couplers they were attached to. The dampening ability of a hydraulic breaker has dramatically improved, making them not as hard on hitches as they used to be. 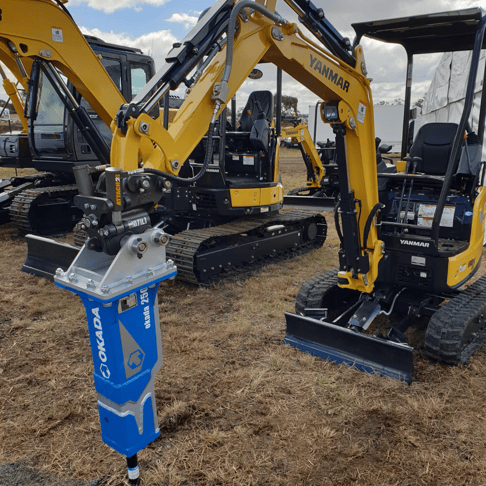 What happens when a breaker is used on a Tilting Quick Hitch? Structurally speaking, there is no problem the chassis will handle the repeated impacts; however, wear does occur in the seals of the actuator.

Breakers operate at around 400 - 2000 blows per minute; compare this against the stroke of a bucket, and that is a lot! The lateral movement of the seal against the steel surface creates micro-wear, reducing the life span of the seal, which adds up with this many impacts.

Using a Breaker means seal replacements and maintenance will be required sooner than if a breaker wasn't in use. This isn't necessarily a bad thing but needs to be accounted for as wear does occur.

What if you use a Breaker often? Then, we would recommend using a standard quick coupler because if an excavator performs this much Breaker work, they're likely using it to break tough material reasonably often and aren't going to get much benefit from a Tilt Hitch anyway.

Just like with a 4wd used periodically in offroad terrain, using a breaker on your Heli-Tilt is no problem; you will need to account for increased maintenance of the seals, but you'll still maintain your warranty for general use.