We often get questions from operators about the operating efficiency of Tilt-Hitches. Traditionally with excavators in the 1–3-tonne range, operators have had to choose between a machine with no tilt-function for attachments, or a quick hitch and tilt bucket combo requiring constant, often messy hose swapping.

In 2019 Attach2 released the Mini-Tilt Hitch; a Draw-Pin Hitch endowing operators with 70 degrees of tilt for all buckets and attachments. This attachment saved thousands of operators across Australia and New Zealand valuable time.

How does the Mini-Tilt Hitch do it?

To answer that question and highlight the real-life benefits of using a Tilt-Hitch, we put the Mini-Tilt Hitch to the test against a traditional Draw-Pin Hitch.

Watch the experiment in action:

Here’s how it went down: 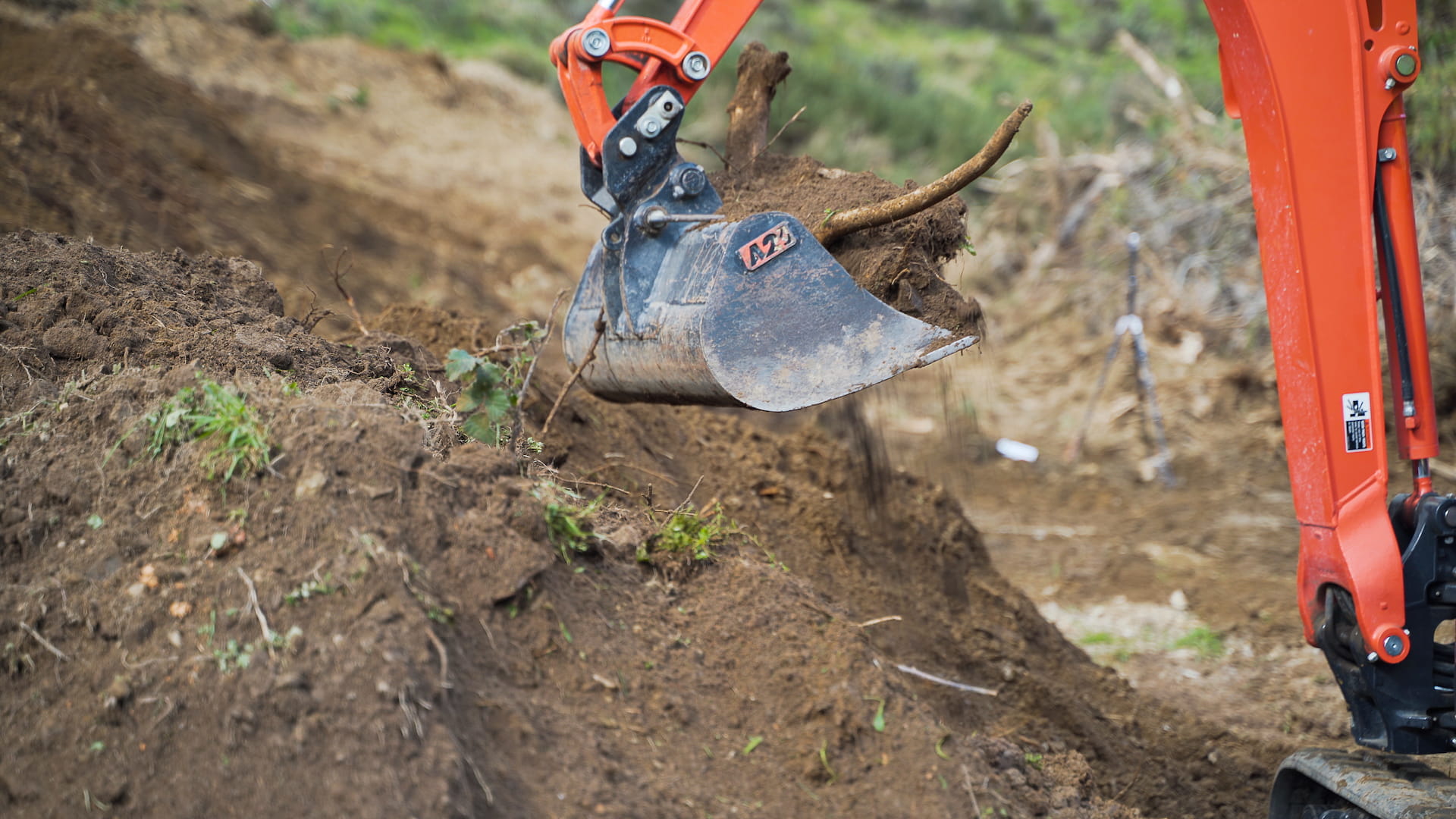 Using an A2 900mm wide bucket and A2 Draw-Pin Hitch, Ben was able to build this berm from start to finish in one hour and fifteen minutes. This included 25 minutes of adding finishing touches: structuring, shaping, and packing in the dirt.

To save Ben from completely rebuilding the berm and having to load it all out again, the comparison between his old hitch and the new Mini-Tilt would be carried out during the final retouching and shaping. 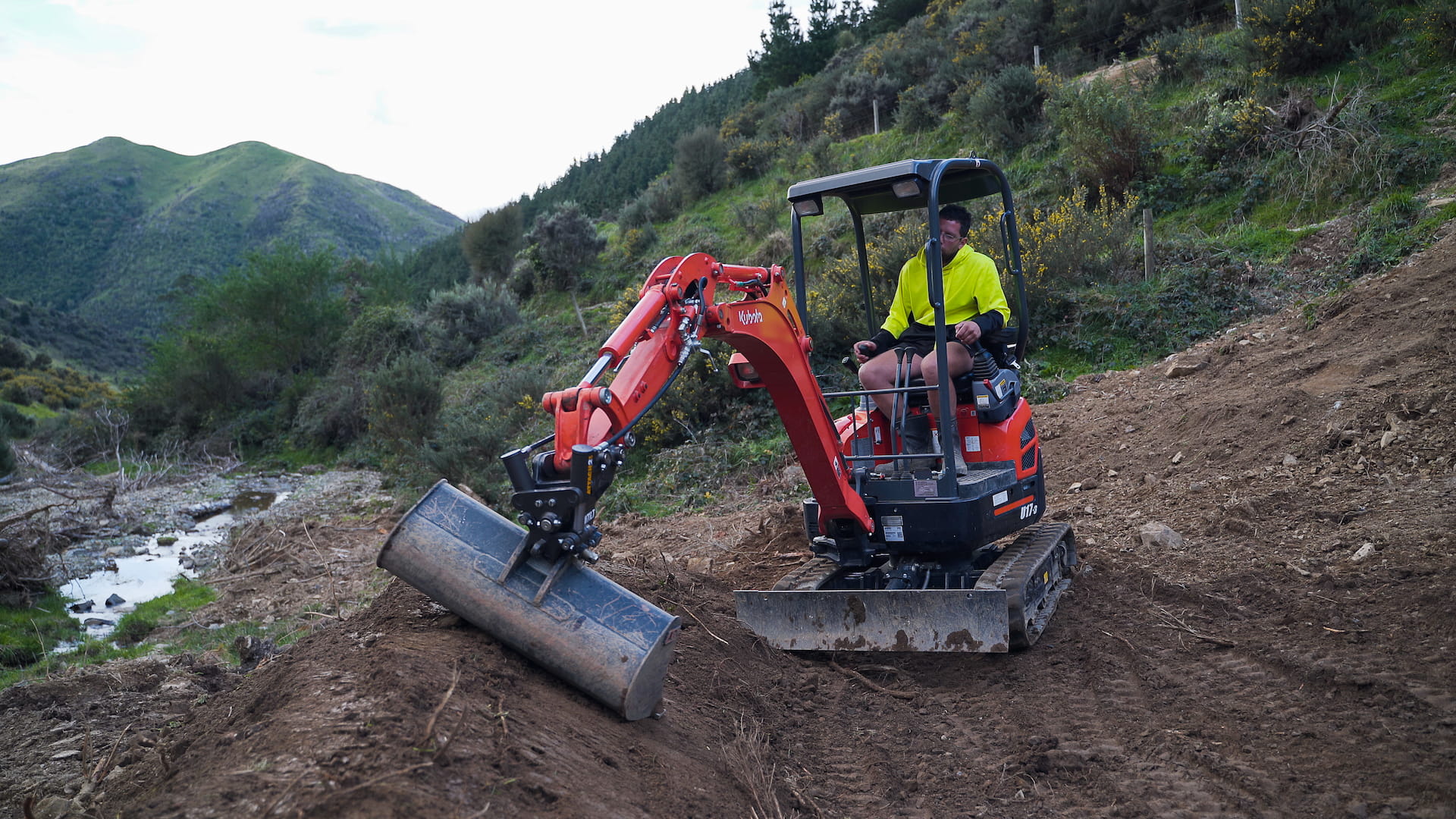 After taking a brief break to have his 1.7-tonner fitted with a Mini-Tilt, Ben was given 10 minutes to familiarize himself with the controls for the tilt.

He then had then had to rough up the berm to remake and retouch it for an apples-to-apples comparison, whilst on the clock.

Using the same A2 900mm wide bucket, but with his upgraded hitch, Ben was able to retouch the berm in just 13-minutes, compared to the 25 minutes it took with his old hitch.

Rather than having to pack in, move around, then pack in again, Ben was able to sit his digger in one spot and utilize the tilt function to reach out and shape the berm with his bucket on an angle whilst packing in the dirt.

Unfortunately, with only 2 data points and some potential conflicts of interest, this result is not statistically significant. That’s the sciencey way of admitting we’re biased. 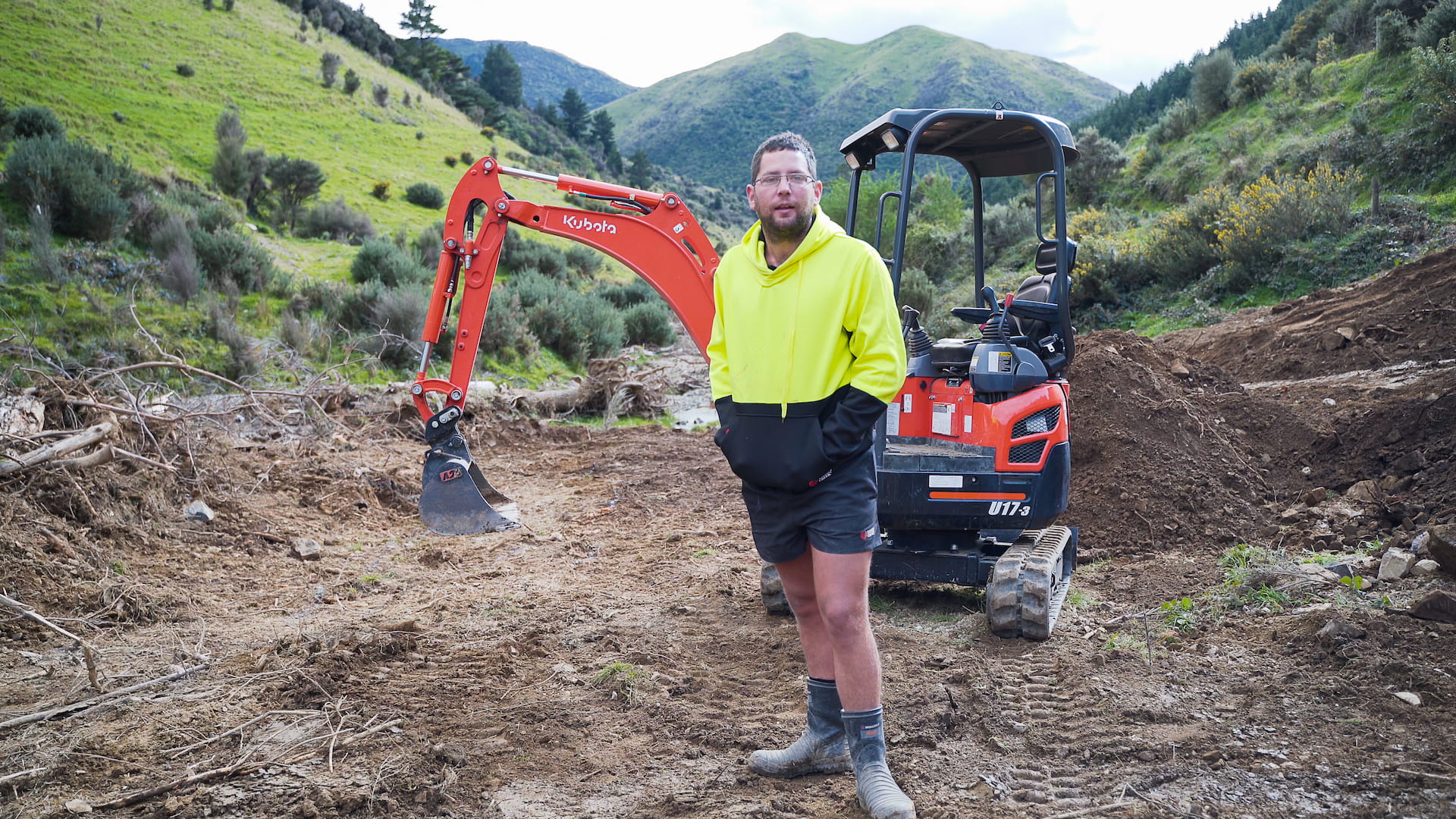 Here’s what he reckoned:

“It was definitely a different experience to what I'm used to, I mean it was my first time operating a Tilt Hitch. It was unquestionably more efficient not having to move the machine around as much.”

As Ben discovered, using a Tilt Hitch requires some getting used to.

“It takes a little bit more coordination, but once you get that down packed it’s pretty clear it’ll really pay itself off.”

“One thing I found [with the Mini-Tilt] was that I didn’t have to rely on the blade to push down to bring the bucket straight,” he says.

“I’m excited to see what the road ahead brings and keep working with it.”

Bang for your Buck

The Mini-Tilt Hitch is an Economical way of installing a tilting function onto your excavator, offering several advantages over alternative tilting solutions:

In any business, time is money. As Ben learned on site, using a Mini-Tilt Hitch can cut time by almost half compared to using a traditional Draw-Pin Hitch for finishing and shaping a berm.

As Ben noted, the tilt-function allows operators to quickly change the angle of the bucket without moving the entire machine. This speeds up grading and means less time using a shovel to finish off projects afterwards, something mini-digger operators are bound to appreciate for smaller scale, more refined jobs.

Thanks to the A2 Mini-Tilt Hitch’s Draw-Pin Quick Coupler design, operators can swap out attachments in a matter of minutes. This requires no changing of hydraulic hoses; simply pull the pin, drop the bucket, and pick up the next attachment that takes your fancy.

Installing an A2 Mini-Tilt Hitch onto an excavator is likewise straightforward.

See our product support team member, Mark Guillard’s instructional video on how to set up an A2 Mini-Tilt Hitch here.

Tilt for one, Tilt for all

Unlike with a tilt-bucket, which are only offered as wide-buckets, the A2 Mini-Tilt Hitch allows operators to tilt any attachment coupled to their excavator, be it a trench bucket, ripper or grab. This added versatility is invaluable for operators, especially for those working in smaller outfits who tend to take on a wide variety of jobs.

The Mini-Tilt Hitch is noticeably less guarded than in competing tilt-hitch designs. This saves weight and simplifies the design. The lack of guarding also makes the hoses highly visible and easily accessible for inspections and repairs.

More heavily guarded designs may offer better protection but guarding often obscures the cause of issues when they arise. For instance, the source of leaks can be extremely difficult to determine without removing the guards, and serviceability, in general, is impaired. Long-term, this means more time spent in the workshop, and less time spent operating.

The Mini-Tilt Hitch confers a slightly lower Breakout Force potential compared to a non-tilting Hitch, though this is more than compensated for in terms of productivity thanks to the tilting function.

Breakout force measures how much power can be exerted at the tip of the attached bucket or implement from curling towards the cab. This added mechanical advantage comes in handy when lifting heavier objects or clawing through harder materials. For an in-depth explanation of breakout force, how it’s measured, and why it matters, check out our updated article on the subject here.

We want to supply our customers with tools that meet their needs. As such, A2 no longer offers Draw-Pin Hitches for machines between 1.5-3 tons. To put it plainly, the Mini-Tilt Hitch has made our old Draw-Pin Hitch redundant in this size class.

If, like Ben was, you’re in need of a new hitch, why not save yourself some time and stress further down the track, and give a Tilting Hitch a try?

The Mini-Tilt Hitch is compatible with 6 major brands of excavators, with models available in the 1 - 2.5-tonne range.

Pricing and excavator compatibility can be found on the Mini-Tilt product page here, and every Mini-Tilt is backed by our industry-leading 3-year warranty.