The new 1 to 2.9 tonne Tilt Coupler. Designed for simple efficiency and improved productivity for a select line-up of compact excavators.

Thanks to all those who joined us on Facebook, Instagram and LinkedIn to collectively brainstorm a new name for what was the DPTR (Draw Pin Twin Ram) coupler.

After a bit of discussion including our own staff suggestions we have settled on the name for the DPTR. Mini-Tilt.

Below is a FAQ of the new Mini-Tilt:

The Mini-Tilt is envisioned as a simple but cost-effective tilting coupler for compatible compact excavators in the 1 to 2.9 tonne range. Utilising a simple one-piece cast design, with CNC machined faces the Mini-Tilt is very durable but not too heavy when fitted to a compact excavator which can be sensitive to the extra weight at the end of the boom.

Will my breakout force be reduced?

When compared to fitting a Tilt Bucket and Standard Draw Pin Hitch the breakout force of the Mini-Tilt and Wide Bucket is actually better.

The Mini-Tilt has its rams extend above the couplers mounting pins making its pin to pin height as low as possible whilst also bringing the rams up, avoiding packing and hose damage that can occur on tilt buckets. Comparing against our own Tilt Bucket and Draw Pin Coupler the height from pin to cutting edge has been decreased by 17% or 130mm.

Can I run other attachments like a Grab, Auger or Rock Breaker?

Yes. The Mini-Tilt can support running these attachments in the upright position. By adding a ball-valve tap to the main hydraulic line, flow can easily be diverted from the Mini-Tilt to the desired attachment without extra lines needing to be installed. Talk to your Excavator Dealer about hydraulic line options for your digger. 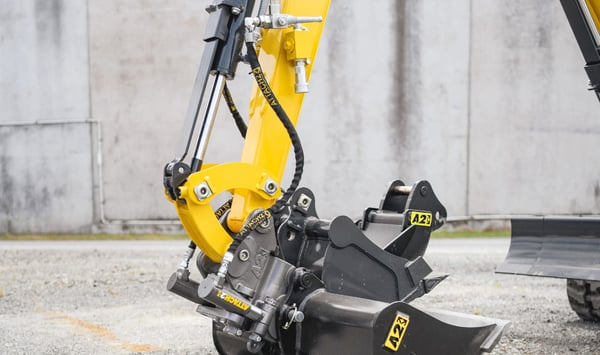 Who is the Mini-Tilt for?

The Mini-Tilt is designed as a replacement to the traditional Tilt Bucket that is ubiquitous across Mini Excavators and as an additional option instead of a Tilting Quick Coupler like the Heli-Tilt. Utilising a draw pin base and a single hydraulic circuit makes the Mini-Tilt an affordable alternative, that also delivers improved efficiency to tilt any attachment. Since the Mini-Tilt uses the same base as a traditional draw pin it also means that the tilt function does not compromise on having to use a different set of attachments or install a unique ear system to pick them up, you can continue to utilise the same buckets with the same ears. Essentially the Mini-Tilt is for everyone and may soon replace the tilt bucket entirely.

Will it fit my Excavator?

At this stage, these excavator models are compatible with the Mini-Tilt

When will the Mini-Tilt be available?

The Mini-Tilt has already had a few pre-orders since its initial debut just a few weeks ago with deliveries starting to take place over the next few weeks. Currently demand has outstripped our supply which we are working hard to speed up! Current fulfilment timeframes at this stage is mid April 2020.

How to make it through Covid-19: Level 4

We've put together these resources to help you, your family and your business make it through the Covid-19 crisis. New Zealand as..

G'day! Welcome to Attach2 Australia, based in Brisbane. A new addition to Attach2's manufacturing ability. The only Australian..