Galbraith Earthmovers has been set up by top excavator operator Steve and his wife Kelly-Anne Galbraith. Their combination of excellent operators and top quality gear, including Attach2 products, is seeing the company and its already fantastic reputation grow quickly.

High-quality workmanship, a great team and good gear has seen Galbraith Earthmovers grow from a sole operator to a permanent crew of 13 and 5 subcontractors in two short years.

The Hawkes Bay company was set up by Steve and Kelly-Anne Galbraith when a change in circumstances provided the impetus to do their own thing. Steve has been working in the industry for many years. He started when he quit school at 14 years of age and began driving tractors for his father on the family farm.

“From there I moved onto bulldozers and started doing agricultural work,” says Steve.

“One evening Dad and I were in the pub and we heard that some guy had got the sack from his job as an operator. We saw a friend who knew the companies owner in the pub, so we went over to have a chat with him about the vacancy and the next day I got the job.”

That company specialised in building forestry roads, and over the following 16 years Steve moved from machinery operator to project manager to operations manager, gaining valuable experience and know how along the way.

Steve has proven his abilities as an excavator operator and in project planning by winning the National Excavator Operator Competition for two years running in 2016 and 2017. The competition has the best operators in the country go head-to-head in a variety of challenges that are designed to test their skills behind the controls as well as their industry knowledge. 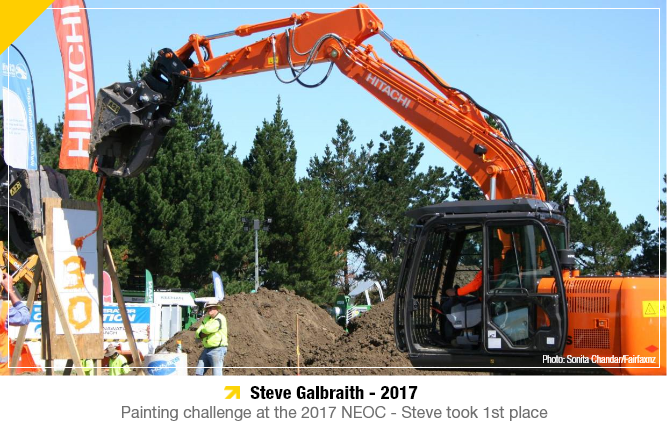 Not long before defending his national excavator operator champion title, Steve and Kelly-Anne took the plunge and ventured out into business on their own. They set up Galbraith Earthmovers, with Steve leading on the project front and Kelly-Anne managing the administrative side of things.

It’s very much a partnership, each relying on each other’s strengths and skills.

“I’d never worked in the industry prior to us setting up in business, but having been with Steve for 15 years, I was very familiar with the ins and outs of contracting,” she says.

Kelly-Anne and Steve are parents to six children, and with the youngest still at school, Kelly-Anne is still a hands-on mum. She also volunteers for St John, and is studying towards becoming a paramedic. As busy as she is, however, Kelly-Anne has embraced her latest role as office manager for Galbraith Earthmovers.

“I really do enjoy my job. I take care of all the office work – from health and safety to admin, to accounts and payroll, along with the day to day running of the business,” she says.

“Fortunately, I am able to be flexible with my St John study, which is my true passion.”

Kelly-Anne says her broad general knowledge approach to management has really helped her get things running smoothly. She even gets behind the controls of a digger when needed.

“I’m just as happy tucked away in my office or out on site with my steel caps on."

“It’s great to be part of it all, and it’s nice to be supportive of Steve – it really is a team effort. We have a fantastic crew of guys, and have a few family members on the team too, and we all work really well together.”

“Our operators are all very experienced and do a quality job. Our clients have been very complimentary about the crew, which is great.”

Steve’s reputation for doing a good job preceded him, as he says he’s never had to chase work. 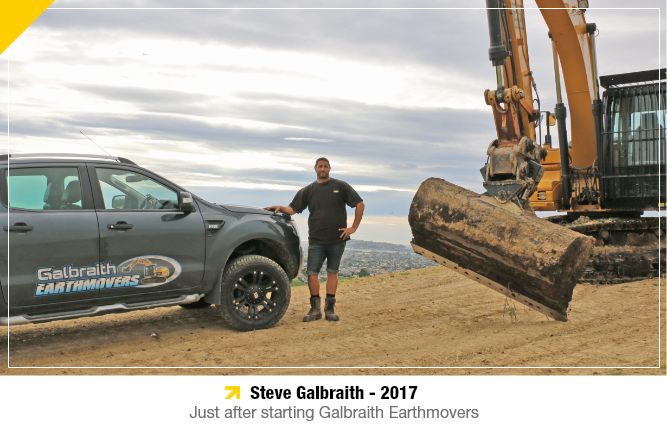 “Naturally, I have a lot of contacts in the industry, and when we first started it was a bit scary going from a regular wage to having to find jobs, but word got out and people started phoning me asking me to do work for them."

“The support was actually overwhelming.”

The majority of their work is forestry related, where they build access roads, hauler pads and skid sites. However, they also tackle farm work – things like shed foundations, drainage, dams and ponds – and also do subdivision work in and around Napier, Hastings and Havelock North.

Currently their reach extends from Wairoa in the north to Waipukurau and Porangahau in southern Hawke’s Bay, from the mountains to the sea. However, as Steve says, they’re not limited to the region – they’ll go where they’re needed, and as they continue to grow you can expect their range to broaden. 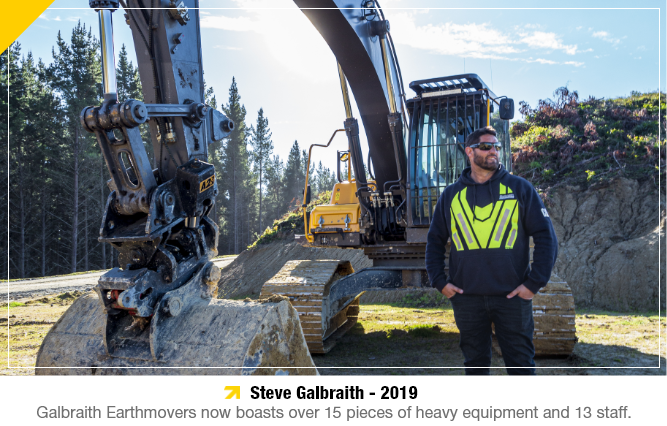 Helping Steve and the team do a quality job is the gear they run. With the exception of just a few machines, everything is bought new.

“We keep all our gear in warranty,” says Steve.

They currently are running excavators equipped with a range of attachments – all from Attach2.

“We have a fair bit of Attach2 gear now – mainly tilt buckets but also grab buckets for slash work, because you can close them, and rippers for stumping. We also have a tilting hitch going on to our latest machines.” 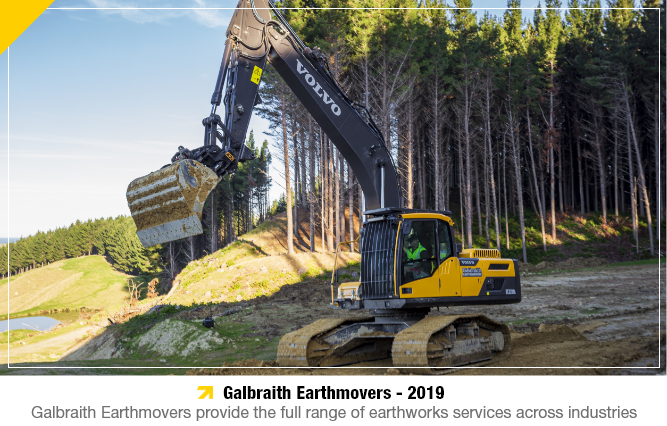 The A2 Twin Ram Hitch is one of Galbraith Earthmovers latest additions to their fleet on their newest excavator. Built off of the A2Lock coupler base the the Twin Ram also has 90° of tilt range that Steve find beneficial while enabling faster changes through the day.

“Attach 2 gear is really nice and strong,” says Steve. “The buckets have thick steel – we’ve had no breakages and nothing go wrong. 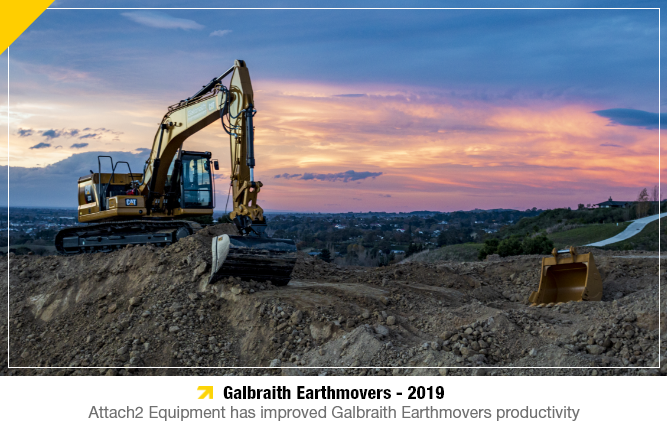 “We’ve noticed an improvement with the latest buckets too – the Mark 3 buckets have more power and we’ve found the material comes out really easily. When you’re sitting there loading 100 truckloads a day, the faster it happens the better.”

It may be early days for Galbraith Earthmovers, but things are off to a tremendous start. With their attitude and approach to business , you can expect to see them continue to go from strength to strength.

Written by Mary Bell.
Video and Photos by Simon Johnston.