The Editor of Deals and Wheels travelled to the far side of Banks Peninsula to see how a contractor was handling their new attachments.

Thanks to the wonders of social media, I was able to gather some information about Canterbury contractors HMR Transport & Excavation, prior to catching up with them recently. The main reason for the meeting was that I’d heard they had taken possession of an Attach2-supplied A2 Lock Tilt Motor-Hitch and Mark 3 wide bucket to add to their assortment of trenching and digging implements that are standard fare on contractor’s sites these days.

Our trip to Banks Peninsula would allow a view of the equipment in operation as well as speaking to a user first-hand, and I did want to get feedback on the grouping of a custom made third-party thumb that was fitted as part of the package when the excavator was purchased.

Introduced to the market in 2018, Attach2 say the A2 Lock Tilt Motor-Hitch and Mark 3 wide bucket have seen good uptake from contractors with favourable reports coming back from operators. 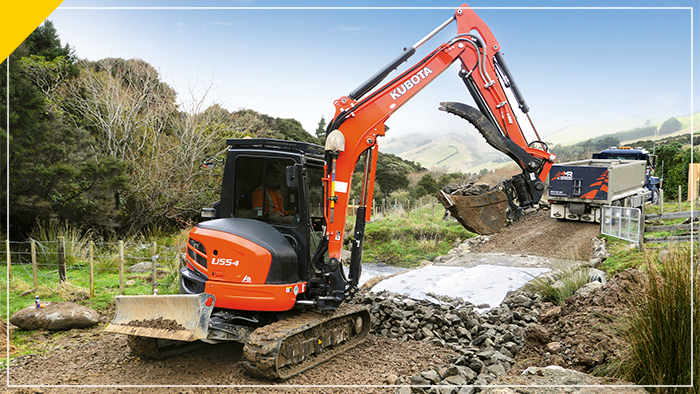 First off though, a little about HMR Transport & Excavation. The business is owned by husband and wife team Carlton and Sarah Everest, who operate throughout the greater Canterbury region on a range of work, spanning from the domestic landscaping/excavations works through to anything rural, such as the Okains Bay site Carlton and nephew Aiken are working on today.

With a background in rural work and two other siblings in the same game, it’s hard to think Carlton would ever consider earning a living from anything other than the contracting industry and it was just over 18 months ago that the move to business owner became a reality. 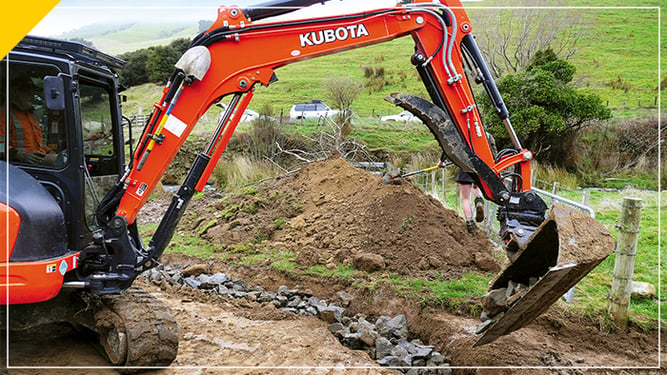 The flow of work sees HMR Transport and Excavation working over a wide part of Canterbury. Okains Bay looks like one of the more challenging areas and those familiar with the area will quickly acknowledge that this is not a place for the faint-hearted.

Just getting anywhere around where Carlton and his assistant were working on the day of our visit involves many kilometres of steep, sharp winding roads, harsh land, and no cellphone coverage should assistance be needed.

It’s here they have installed a crossing through a fast-flowing stream and are in the early stages of building a driveway some distance in for a future house site. This type of increasingly varied workload required a re-think on how work was carried out, ultimately leading to Carlton working with his latest attachment provider to find a solution. 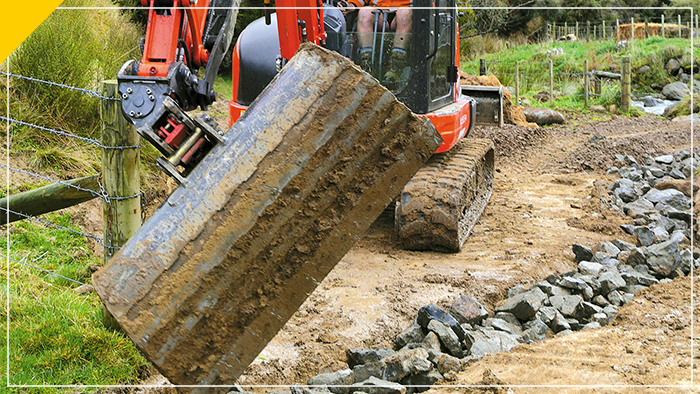 Working in areas like he was on the day we visited was one reason Carlton says he chose to run with a Kubota U55-4 and Attach2 attachments.

“One of the advantages for me was the CB Norwood (NZ Kubota dealers) were able to provide a complete package that was set up and done prior to receiving the new machine,” he says.

“The bonus was that Attach2 are preferred suppliers to Norwood so their recommendation after listening to our requirements was we fit an A2 Lock Tilt Motor-Hitch and Mark 3 wide bucket and add in a thumb from a separate supplier.”

While some may shake their heads at the thought of multiple suppliers working on one specific project, Attach2 says one key aspect of their business is working with other engineering companies to achieve an outcome for the customer.

“While we could set up and supply thumbs or other pieces of custom equipment, we prefer to supply a strong base package and have other businesses integrate their intellectual property (such as the thumb) to get a final attachment exactly suited to client requirements,” says Attach2 marketing manager Jacob Hart.

Carlton says a lot of thought and science has gone into how the double-fingered thumb integrates with the operation of the A2Lock Tilt Motor-Hitch.

“Although it may not seem, it’s more complicated than it looks and quite clever,” he says as the tilt-motor is put through its 90 degrees of left/right sideways movement.

“The whole unit is made so I can work the hitch on any angle and it does not interfere with the thumb.”

The A2 Tilt-Motor Hitch is constructed with a German-made tilt-motor, coupled to New Zealand-built Attach2 components. One key aspect Attach2 is keen to have known is the manifold which on the latest model has been tucked out of harm’s way.

As well as keeping hydraulic hoses as far away as possible from being hooked by errant tree branches, the manifold also contains a smart valve (pressure relief valve) to reduce the possibility of hose bursts from bucket shock-loading, such as what comes from ripping out tree stumps or concrete.

“The manifold pressures are adjustable, so our technicians can tweak them to get the exact movement required, although this is seldom necessary it is something we can do if necessary,” Jacob says. He’s also quick to point out that work on any pressure-sensitive equipment is carried out by trained professionals. 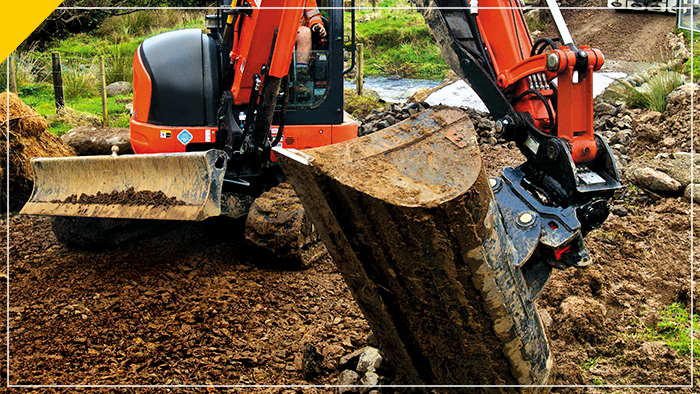 The latest model out of the Attach2 design studio is the Mark 3 A2 wide bucket. Built for longevity and efficiency, it features wear strips on the back of the buckets, bolt-on cutting edge (five-tonne and up), and tapered sides to help when digging at a tilted angle. BIS 400 grade steel is used for the front styles, wear strips, cutting edge and bucket wrap, making the Mark 3 model a formidable ally for serious contractors.

While the attachment had only been used for 130 hours since its recent delivery, the new set-up is far from being run-in, though Carlton reports that becoming accustomed to the attachment(s) was straightforward.

“The type of work we’re doing in some of these more remote places calls for adaptability and reliable gear,” Carlton says.

“The ease of use meant it wasn’t difficult getting into some of the more intricate work straight away.”

The adaptability Carlton talks about is clearly evident on the Okains Bay site, where the team has installed 400mm PVC pipes with associated gabion work and rock retaining in preparation for the sealed crossing to access an impressive small rural valley block.

Our visit timed in nicely with the placement of drainage as the work moved past some of the more tricky aspects and up towards the long driveway, which will run up to the eventual building site.

The side drains, which evidence suggests have been cut with the A2 Lock Tilt Motor- Hitch and Mark 3 wide bucket, were in the process of being filled with clean rock, which is carefully being placed on top of the coil PVC pipe.

What comes to mind watching Carlton work the attachment is thanks to the characteristics of the Attach2-supplied equipment, the drainage work looks exceptionally tidy, with the absence of spillage providing the additional benefit of a safer working area than perhaps traditional trenching would normally provide.

Along with this, it becomes easy to see Carlton’s requirement for a third-party installed thumb as he places larger rocks in strategic spots, anchoring the drain coil in place.

“Not everyone likes this type of hill work as it can be challenging, but this is where we excel,” says Carlton.

“Having the equipment suited to the varied work we do puts us in a place to take advantage of that.”

Written by the Editor of Deals and Wheels (Randolph Covich)

Images and Video by David Lott